Rappaccini’s Daughter: Opera Blooms at Theater for the New City

SEE THE REVIEW UNDER TAB  “RAPPACCINI’S DAUGHTER” above.

Beth Herstein interviews Linsey about the beginnings of Rappaccini’s Daughter, meeting Michael, our collaborative process on RD and in general. She asks: How did a fiction writer get into this? Is writing an opera like writing fiction? (Yes and no. It does bear some resemblance to writing a novel.) Why did we call this an operatic musical? (Good question.) And what is our next project together?

Click the link below for the answers to these and other mysteries.

“Rappaccini’s Daughter is a moving and inventive adaptation of Hawthorne’s profound gothic tale of love, death and botany. Now at Theater for the New City, this strikingly theatrical opera has lyrics by Linsey Abrams, music by Michael Cohen and was staged by Lissa Moira. Add more instruments to the musical director Jonathan Fox Powers’ impressive solo piano accompaniment, and this engaging work would be worthy of a place onstage at The Met.” 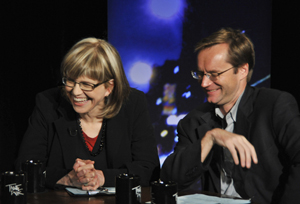 Theater Talk’s co-hosts, Susan Haskins and Michael Riedel, theater columnist at The New York Post, share a laugh on one one of their shows, aired regularly on PBS affiliates and CUNY TV.

September 4th Issue:  Front page feature by Sabina Mollot on the upcoming production of “Rappaccini’s Daughter” at Theater for the New City. Cast photo features singers, Douglass McDonell, Samantha Britt, William Broderick and Martin Fisher. Darcy Dunn rounds out the company. Linsey and Michael share their thoughts on the original Nathaniel Hawthorne short story, its contemporary relevance and the timelessness of the 1844 tale’s themes of scientific manipulation and craving for power, and insights into human desires as well as the unpredictability of perceptions, actions and experience. 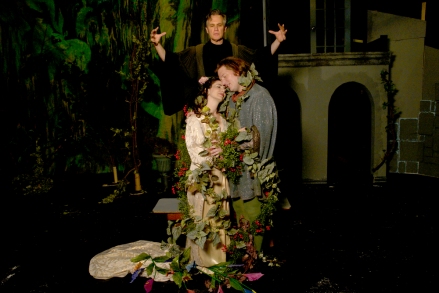